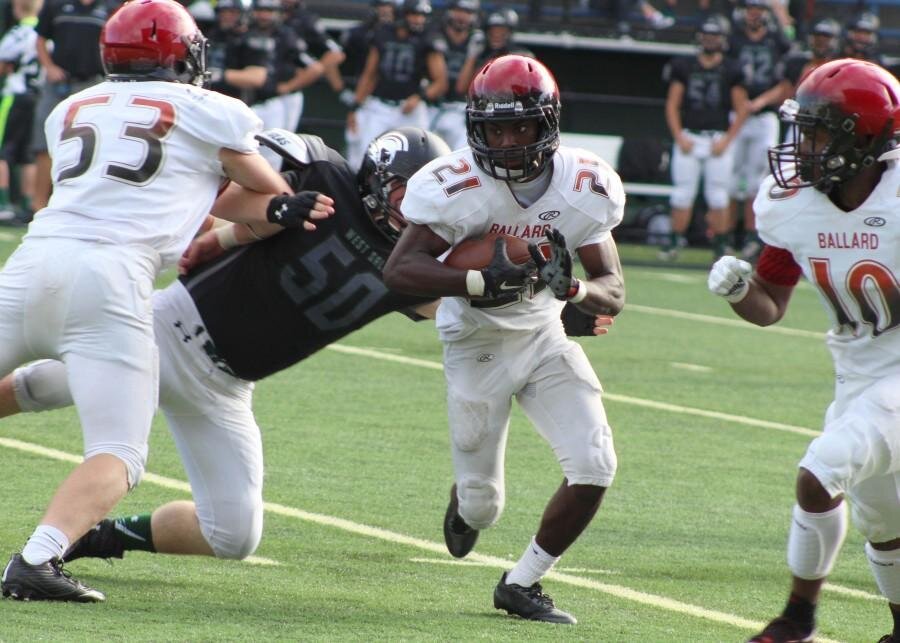 Senior wide receiver Elijah Davis had 10 catches for 150 yards and one touchdown.

The Beavers took down Oregon’s number seven ranked West Salem Titans last Saturday afternoon by a score of 66-48 in a back and forth battle, to improve to (2-1) on the season.

Ballard  started the game strong, scoring a pair of touchdowns on their first two possessions of the game. But the Titans answered back on their next drive with a touchdown of their own. The rest of the game remained an offensive frenzy and Ballard’s offense never let up.

Senior running back Antoine Patton was a major contributor with 13 carries for 88 yards and three rushing touchdowns, and an 84 yard kickoff return for a touchdown. Quarterback Davine Tullis put up incredible numbers as well, going 19-28 for 339 yards and four touchdowns through the air.

“We have great skill players,” head coach Joey Thomas said about the offense. “But the reason that they are succeeding is because of our hogs up front.” In their last two games, the offensive line has paved the way for the entire offense to do damage.

With the win, the team has finished both of their out of state games this year and despite the loss to Vista Murrieta two weeks ago, they are looking at those games as a positive.

“Those games were great exposure for our kids, there were a lot of college scouts watching those games,” Thomas said. “We intentionally played those tough teams to prepare for the rest of our season. We’ve played the best so far.” Vista Murrieta (3-0), is ranked 19th in the state of California and will likely be the toughest team Ballard will have to face all season.

Now they will look to get their first divisional win of the season this Friday against Chief Sealth.