The problem with parking is that it isn’t going anywhere 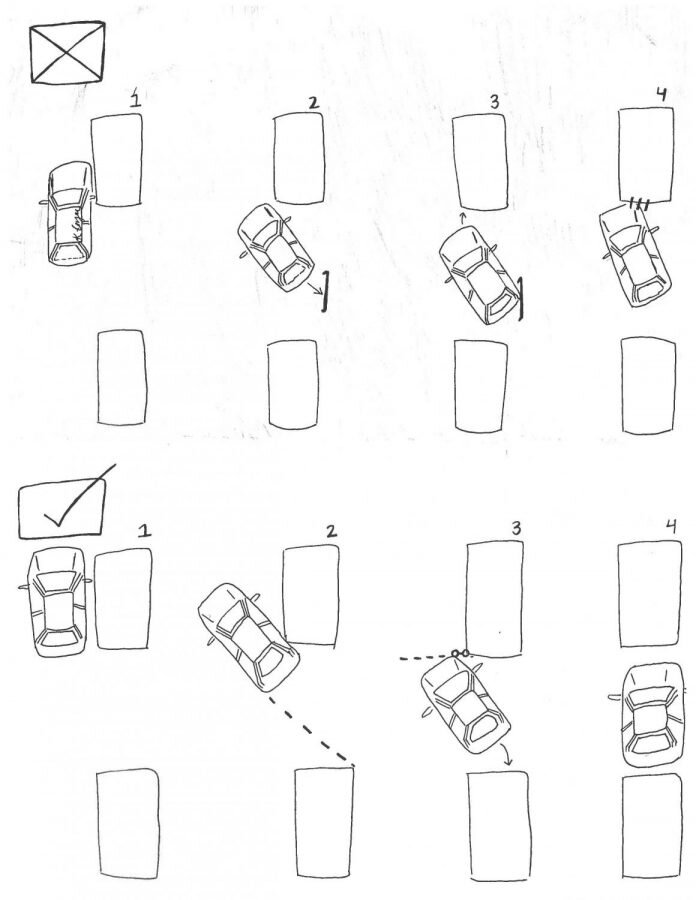 When adults think of the hazards of new drivers, they think the biggest problems will be teens speeding down main streets and hitting their kids or old ladies. If they took a look at the parking jobs around the building on school days however, they would be worried for different reasons. The careless and inconsiderate parking done by students makes life for everyone around the school more difficult than it needs to be, and it could be fixed if students showed just a little more responsibility.

For a school with so many students who drive themselves, it’s strange that there’s no parking lot for students. A large portion of upperclassmen battle for parking spaces on residential streets and that fight just gets harder throughout the year as more sophomores get their licenses, adding a new batch of inexperienced drivers to the free-for-all for parking spaces.

“People will leave five feet between them and the next car and there ends up being so much dead space,” Inge said.

So many more spots would be made available if drivers would use common sense and pull as far forward as possible. These same spots that are just barely too small result in damaged cars when students, desperate to not be late for school, rush to try and park in spaces that are just a little bit too small.

When students and parents come to after school events, such as a basketball game or preformance, they probably don’t think they’ll have to worry about parking. Because the parking lot in the front of the school only has five visitor parking spots, most visitors end up having to park on the street, sometimes blocks away. When the parking lot is full (which it usually is) people take to parking on the streets, blocking residents from spaces in front of their own homes. Kevin Millard is a resident on 13th and has had to deal with the struggles of student parking.

“I use my car during the daytime and try to find a place to re-park in the morning or afternoon, there’s a huge impact that the school has when it’s in session,” Millard said in an email interview. “During school hours, I usually have to park at the very far end of my block (13th Ave NW between 67th & 70th) as there’s nothing available closer to my house.”

A resident can’t even park in front of his house because of just how many student vehicles fill the side streets surrounding Ballard. Even worse than taken spaces, many cars have been damaged by students parking on residential streets.

“There have been side mirrors scraped off and cars hit right out front of my house before,” Millard said.

To make matters worse, students, often in a rush or simply not willing to get in trouble, rarely leave a note or insurance information.

If visitors are lucky enough to find a spot in the parking lot, they’re stuck with spaces that a hot wheel would have a hard time fitting in, at roughly eight by 14 feet. Most cars including sedans, trucks and SUVs have average dimensions around six by 15 feet, making for a very tight fit. These dimensions are acceptable for a compact car spot, but every spot in the parking lot is eight feet wide and not every driver visiting or working at school is driving a compact car.

While an extra foot on each side seems like a lot of extra space to park, 12 inches really isn’t that much; two U.S. bills side by side are a foot long. When two cars are already parked on either side of an open spot, it’s even more difficult. It’d be a miracle if each of those cars parked perfectly—most of the time it’s impressive if cars are parked completely inside the lines.

You need to be pretty patient and attentive to safely make your way into one of these spots, something teens usually aren’t, which is part of why students aren’t allowed to park in the lot. Despite the consequences of a $50 ticket and lunch detention, students still park in the lot, desperate to get to class on time when street parking is filled up, or just too lazy to walk a few blocks. The inconsiderate parking that comes with this results in damage to teacher and visitor cars parked in the lot.

“One time, someone backed into the left side of my car and scraped the entire side all the way down,” Katrel said. “Last week, someone in a white car scraped the entire length of my car. It was definitely in the parking lot, I saw it right away, no one has left a single note.”

Katrel has heard of multiple other teachers who have had damage done to their car as well.

“I’ve talked to my colleagues and they were like ‘Oh yeah, our cars are destroyed too, don’t even worry about it,’ and they basically said that the administration wouldn’t care about it,” Katrel said. “I don’t think it’s their job to be interested, but it should probably be the school district’s job.”

Over the course of a school year principal Keven Wynkoop said six to 10 teacher cars are reported to the administration as getting damaged.

“That’s one of the reasons we try to be vigilant about keeping students out of the lot, because there’s no accountability with them,” Wynkoop said. “If someone hits the corner of a car and leaves a scratch, they can drive off and no one’s the wiser. At least if it’s a fellow staff member, they’re going to say something because they can deal with the insurance and things like that.”

In the bulletin sent out on March 26, staff members were asked to take pictures of any student vehicles in staff parking lots, and send them to the administration. Teachers were also reminded to keep their parking passes showing so it’s easy for security to determine which cars belong to students.

Unfortunately, with the layout of the school it’s just not possible to add student parking. Even when Wynkoop attended this school, before the remodel in 1999, the student parking lot only accommodated about 15 students.

“It’s really about the space we have. One of the decisions that was made when they made this building was to expand the footprint, and when they did that one of the trade offs was that there was less open space,” Wynkoop said. “I think it’s a city code that requires a certain amount of spots for the staff members to be available, so that’s why part of these spaces are so small, so that the required number of spaces could be made.”

While it would only seem fair—considering a school is built for students yet there is no parking accomodation for them—no parking lot is going to be added for students and the spaces in the existing one aren’t going to get any bigger, so there’s no use in complaining.

The problem here isn’t simply that teens are inherently bad at driving, it’s that they show little consideration when parking, and that’s something that can be changed. Just try to show up to school earlier so you get a better spot and take more time parking—just a few minutes makes a big difference. Remember that hitting cars of teachers, visitors, residents and other students not only reflects poorly on the school, it reflects poorly on yourself and all your peers who drive.