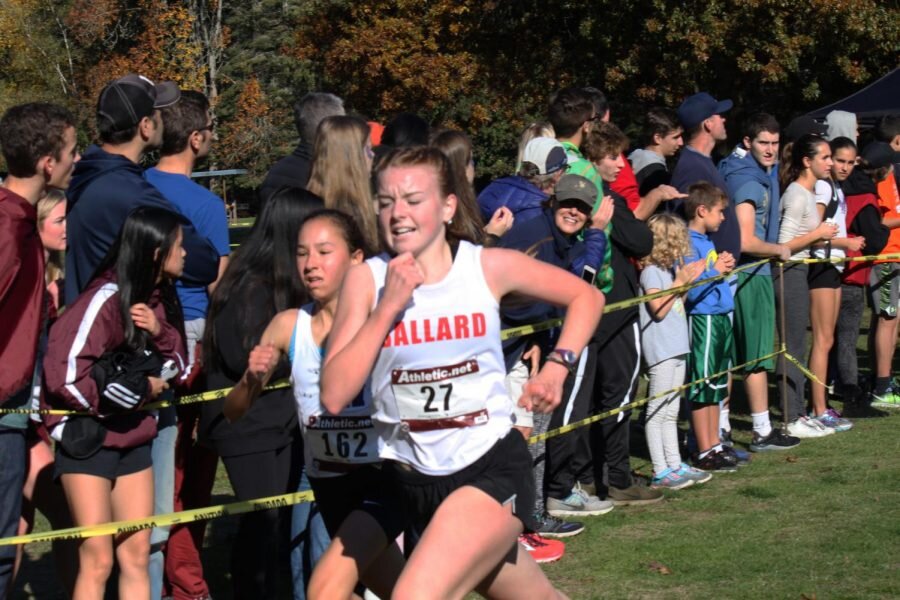 Senior Lou Yardley yards from the finish line. Yardley finished with a new season record (19:40.17) at Districts and is consistently a difference maker for the Beavers with her low times.

Four hours away in Pasco, Wash., seven Ballard girls lined up alongside over 150 other runners from throughout the state. Even after winning a Metro championship and placing 2nd in district, the girls cross-country team had more to prove.

After about 25 minutes of running, the race was finished and the times of each runner had been recorded. Eighteen-year veteran Head Coach Robert Mirenzi, who, for the second time in three years, won the Metro Cross-Country girls and boys Coach of the Year this season, watched the girls team finish 3rd, with almost all of them recording times under 20 minutes. “It was such a good performance that after they ran, I didn’t even care what places they came in,” Mirenzi said in a phone interview.

Even though, in cross-country, much of the emphasis is put on the individual and their time and place, coach Mirenzi says “It’s as much of a team sport as anything I’ve seen.”The team’s tightknit group of runners was pertinent to their achievements this season. “It was like an organism,” coach Mirenzi said. “They were all working towards the same goal.” Seniors like Veronica Redpath, who have been with the team through all four years of high school, help keep the team’s core intact and motivate underclassmen to stick with the team.

Senior Lou Yardley, who has been with the team for three years, has emerged as a leader through her sportsmanship and work ethic. She says that having good chemistry with the other runners helps at meets and in practice. “We’re all really close friends,” Yardley said, “that helps a lot and we motivate each other.” Yardley finished with a new season record at districts and is consistently a difference maker for the Beavers with her low times.

Also Paramount to the team’s success has been their close times. At state, the Beavers finished with the lowest spread of any top 15 team, with just 27 seconds separating their first place runner from their fifth place runner. “We run with each other everyday,” Yardley said. “We know how each other run.”

After joining the cross country team this year, junior Nell Baker immediately became a huge part of the success for the team. At state, Baker set a new personal record by 43 seconds and finished second(19:26.20) for the Beavers. Though only being with the team for a short time, it didn’t take her long to recognize the significant prowess Ballard had at every meet this season. “Ballard was always the team people were watching out for,” Baker said. “They knew we were coming to give it.”

Junior Anastasia Konugres, who finished first(19:10.30) for the Beavers at state and set a new personal record there, has been an important facet of the team’s gameplan all three years she has participated. She says that one of the qualities that the team shares and makes them great is humility. “We don’t let wins get to our head,” Konugres said. “Each meet we are really working for it.”

After competing in the state race for the first time four years ago, both teams have made it back every year since. Coach Mirenzi hopes to continue this success and encourage Ballard students to take part in the sport. “Running is its own reward,” Mirenzi said. “If you show up and do the job, you get better.”