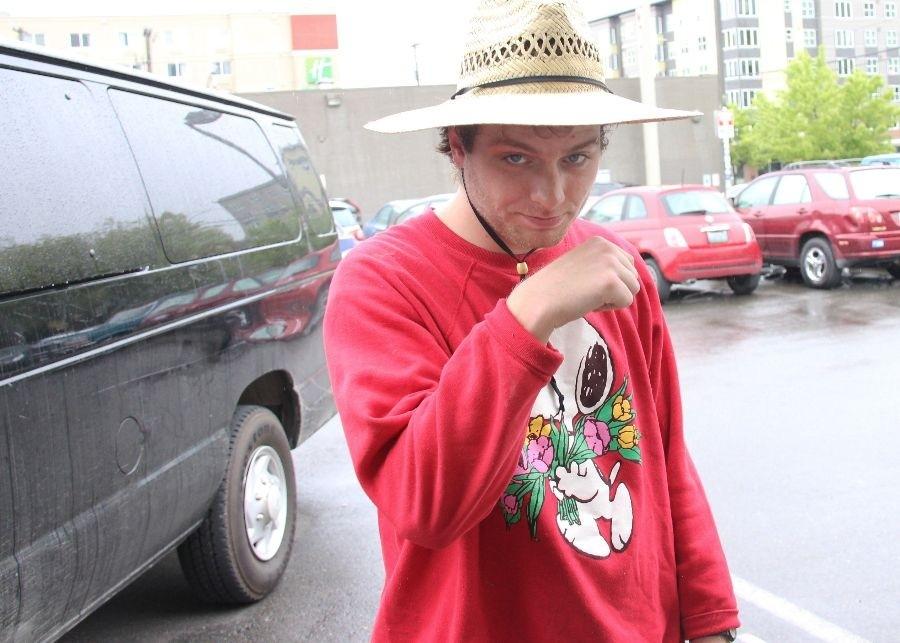 Susan James, volunteer services coordinator at KEXP public radio, pets the soundboard as with a dog laying in the doorway.

Outside, Mac DeMarco and his backing band arrive in a black van.

“It’ll work,” James says. Then, after a number of reboots, it does. Sound levels appear on green, yellow and red meters at the top of the board as the band sets up and begins to play.

“Can you play the drums for me a bit?” Suggs says to drummer Joe McMurray.

“I try to, as much as I can, do a little research and listen to the bands ahead of time,” Suggs said.

“They had their tech with them and I could ask him what he normally uses as far as reverbs and delays,” he continued.

But any given KEXP in-studio performance has a long way to go before it arrives on Suggs’ plate.

“We discover bands in all kinds of ways,” Cheryl Waters, host of the Midday Show, said in an email. “Band[s], label[s], promoters and individuals send music to the station daily.”

“As a general rule, we have bands play live on KEXP that we are playing regularly,” Waters wrote. “I have developed a large network of labels, managers, promoters and band contact[s] over the many years that I have been booking in studios. 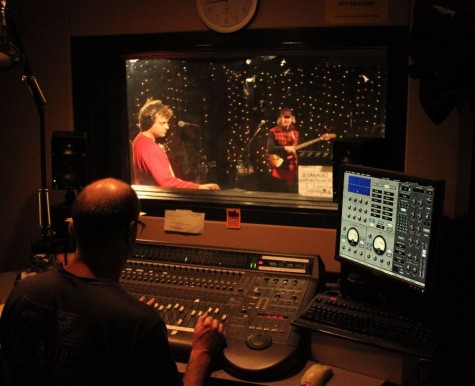 “But, in some cases, I just do a bit of online research to make contact with a band.”

Suggs continues to check sound with DeMarco and the band. Across the hall, video producer Scott Holpainen is setting up at the control board that he mans during live sessions. On three screens above his desk Holpainen can see everything the cameras can. The job is hectic and requires a quick responsiveness from the crew.

“I need to communicate to the shooters if there’s anything that’s not working, but there are a lot of pieces of this that are kind of — it’s not automated,” Holpainen said. “So you’re kind of having to work a lot of different things at the same time. The way we put all this together was very kind of kluged together.”

“You know it’s a pretty solid set up now, we’ve got some good stuff, but it’s still kind of put together in a way that’s pretty unique,” Holpainen said. “I don’t think anybody else is doing it this way.”

At 12:55 pm, Waters is in the studio and the broadcast will begin in five minutes. Waters tells the band to be careful not to swear once they go live. The room fills with profanities from the four.

Then the show begins and all the heavy breathing and creepy uncle smoker’s voice that are token of Demarco performances come out for the KEXP audience.

“Salad Days” is the first song of the set. White’s solo on “Still Together” is an unexpected detour via Roland Space Echo and a drastic crunch. DeMarco’s still touring the old album, while songs from “Another One,” the eight song mini LP scheduled for release on Aug. 7 via Captured Tracks have yet to appear on stage. 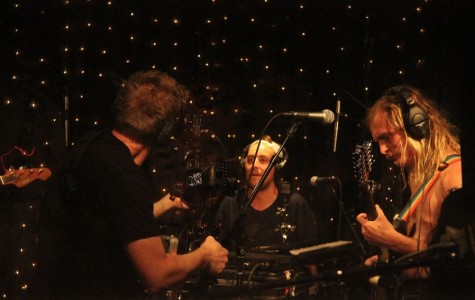 Video producer Jim Beckmann catches guitarist Andrew Charles White on “Still Together.” White’s solo on the song was a refreshing detour from the album version and a one of the highlights of the set.

Around the rug in the center of the room, a shooter moves with his camera from musician to musician as the band plays from song to song. There are four cameras — two stationary, two manned — but what the audience sees at any given moment is controlled by Holpainen, who switches between cameras through the board.

Up on his screen after the show, Demarco’s four song set is on loop.

“I’m choosing camera angles based upon what’s going on in the song, like the rhythm of the song,” Holpainen says. “I try to cut on the beat and I try to pick angles that are complementary to each other.

“Like, if you’re shooting, if your shot’s straight on, your next shot you want to get from the side, you know? So you never want to have two shots that are kind of framed up the same way. It just doesn’t look good.

You’re thinking about these things in real time and trying to cut…” he stops and laughs at the loop on his screen which is full of White, laying out the lead synth for “Chamber of Reflection,” shirtless, swaying his hips, all tattooed. “Demonman,” says the writing across his sternum.

“And paying attention to things like this, you know, that are happening that are worthwhile,” he says.

Outside in the parking lot, DeMarco and band took a moment to smoke and take selfies with staff and performance guests.

A girl compliments DeMarco’s sweater, which is red, has Snoopy on it, and was purchased at an estate sale.

“She was cool too. She had all these great clothes,” DeMarco says of the deceased woman.

“Wait, she was there?” The girl asks him. 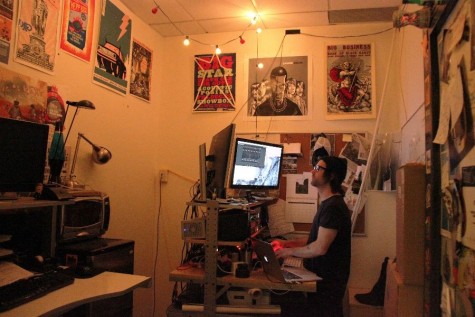 Video producer Scott Holpainen, who directed for the Mac DeMarco in-studio, sets up at his control board before the show. “There’s shooting going on in there [the studio] and I’m relaying information to them, I’m switching on this board and then I’m also monitoring the Livestream output,” Holpainen said of his responsibilities. “So there are kind of a lot of things going on at once.”

“No, she was dead,” DeMarco says. Everyone laughed.

There’s been less DeMarco related content coming out from small outlets like KEXP recently than in the past. He attributes this to the fact that demand for artists is inherently higher at certain times.

“When we do festivals in Europe they’re always like ‘come to our session,’” DeMarco said. “I don’t know not that much anymore.

“I think it’s mainly when the new album comes out, and they’re like, they want the songs for the first time.”

Before DeMarco and the band pack up and get back into their van, KEXP photographer Dave Lichterman asks them to strip down for a “shirtless boy band in the rain” shot.

Inside, KEXP staff had already begun to move on. A woman is standing with her instrument in the studio doorway.

“Where should I set up?” she asks Suggs. He points out a place for her in the studio corner and the in studio cycle begins again. 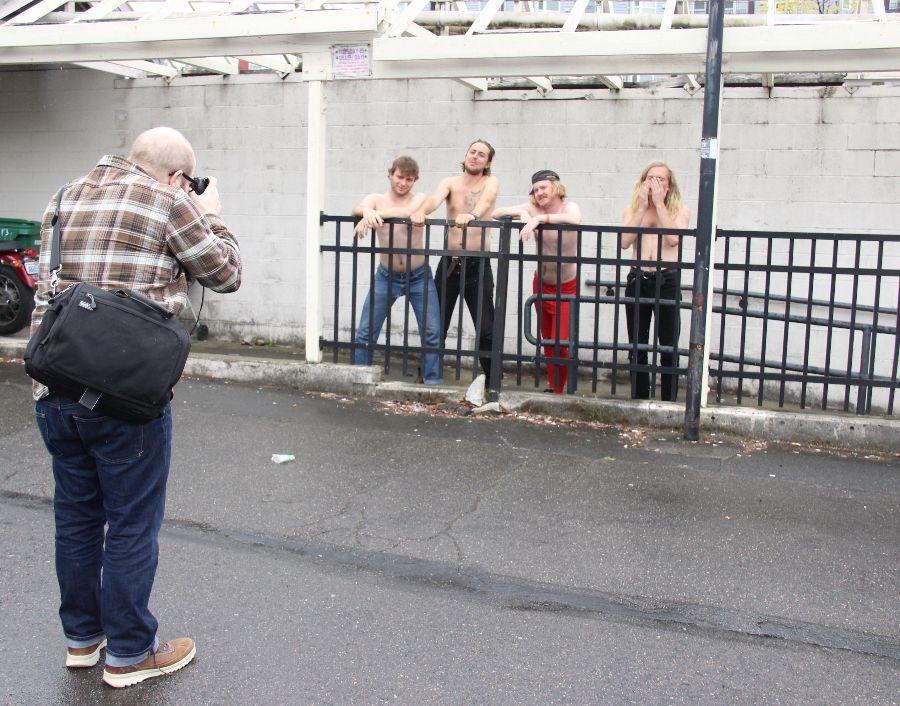 Justin Lichterman captures the musicians in a “shirtless boy band” shot. Lichterman wasn’t able to follow through with his original concept, DeMarco being conceived by a giant stuffed bear, because there were no such bears available.