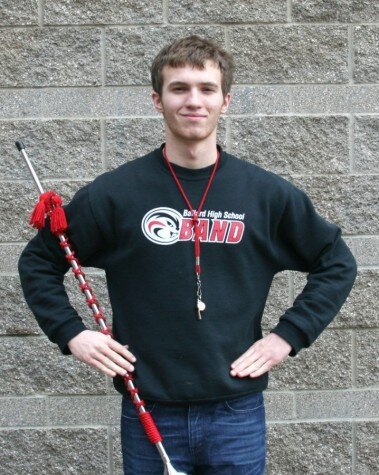 As lead drum major, senior Max Parsons is responsible for guiding the marching band and keeping them on beat. He directs with his baton and his whistle.

Parsons is the lead drum major of the award winning Ballard Marching Band. “It’s a lot of pressure. I have to make sure the band doesn’t crash into anything. It’s harder being lead,” he said.

Parsons learned to drum major at All-City Marching Band, which is instructed by John Aguilar, the current University of Washington marching band drum major. Established in 1951, All-City is a summer band that is part of Seattle Public Schools. The band’s members come from high schools throughout the district.

According to Parsons, conditioning at All-City includes “running up and down the stairs or around the field, push ups, learning the jabs [the moves that the drum majors do with their batons], learning song calls, how to whistle properly.”

“When he was new to drum majoring, he would get on the wrong beat conducting basketball games,” Ballard alumni and former drum major Julian Amrine said. “I would look over at him and sometimes I never knew where he was in the music.”

The drum major run makes conducting extremely difficult. The run consists of leaning back as the drum major kicks their feet out in front of them.

“It’s harder than it looks running up and down the [aisle of the] band while still moving,” Parsons said. The considerable weight of the batons make extensive conducting physically challenging.

To become drum major, one must prove their dedication and passion to Band Director Michael James. “I looked for people who really enjoy marching band and are really into it and he [Parsons] was one of those people,” James said.

“I like the discipline and being able to show off a little…I don’t really miss playing clarinet. I love drum majoring too much,” Parsons said.

The band isn’t always serious; the musicians always find time to laugh a little. “Dropping a baton always brings a smile. It breaks the stress of drum majoring,” Parsons said.